I'm just gonna put it out there and say it. Contrary to popular opinion, I can't say I've ever been a huge fan of Alexander McQueen's collections. Don't get me wrong, I can appreciate them as spectacular shows of genius design, but on a personal level they've just never really stood out to me. However after seeing images from their SS14 show my opinion has been somewhat swayed. It was powerful and thick with references to strength and female empowerment such as Amazonians, Zulus, tribal priestesses and Celtic warriors. Thus a collection was created that pulsated with National Geographic references and was alive with swishing ostrich feathers and crocodile skin that bordered on the fetish. All in all it was a beautifully strong collection that was so immense it changed one girl's whole opinion on the brand.// 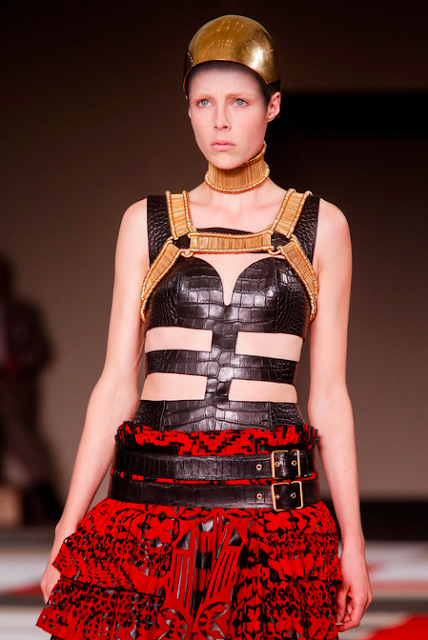 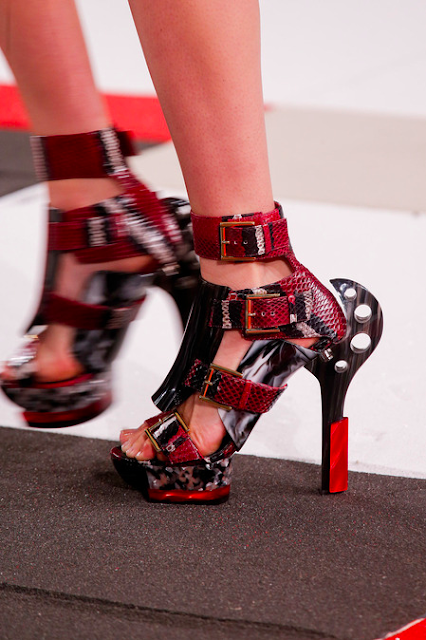 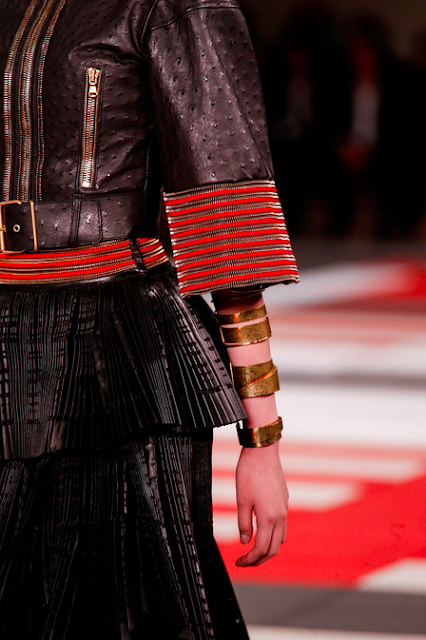 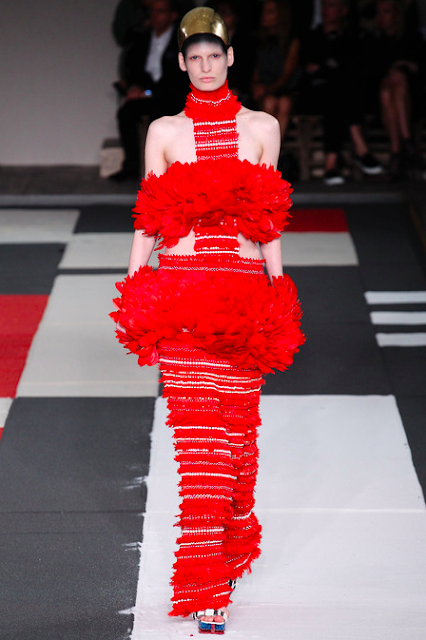 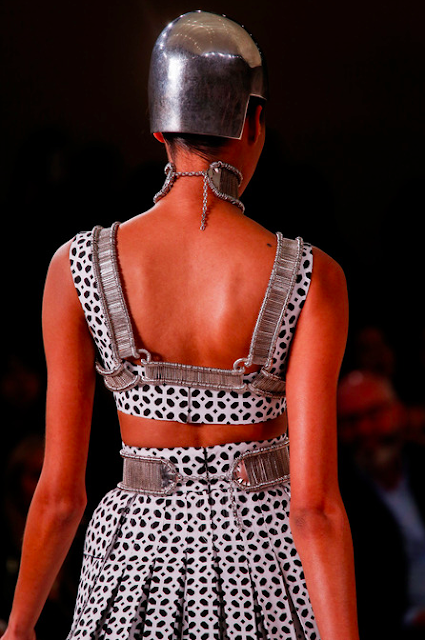 At last I am free! Free from the metaphorical shackles of coursework and free from that treacherous journey I had to make every day in order to get to and from college. In the last few months of college I had to make some sacrifices - my entire social life - so that meant no more blogging for a while. I was also quite lacking in inspiration so didn't want to post a load of twaddle for the sake of it! But I've got some awesome things planned for the summer (using the term 'summer' lightly there, of course) that I can blog about, and before that I thought I would kick things off by giving you a sneak preview of what's been keeping me in hibernation for the past few months.

So, bearing in mind this was my first time ever using CAD programs such as Photoshop, Illustrator and InDesign, these are some illustrations inspired by dystopian art. I created these rather 'deliberately-basic-on-purpose-looking' illustrations by enhancing my own original sketches with the help of Illustrator and Photoshop. 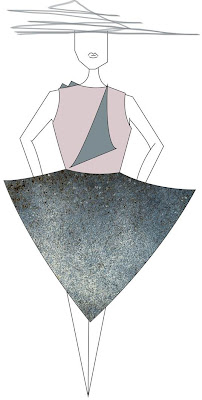 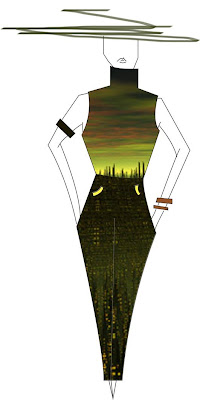 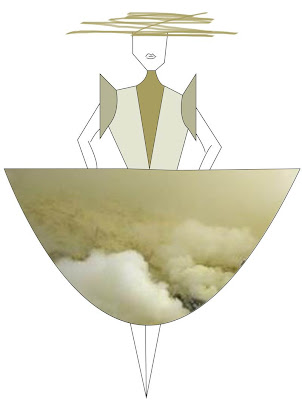 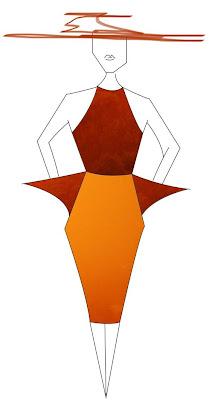 Sticking to the same theme, the next illustrations were post-modernist inspired, and were created entirely on the computer. 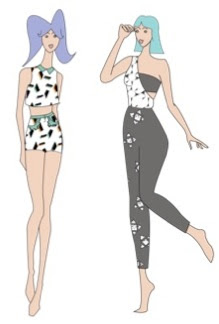 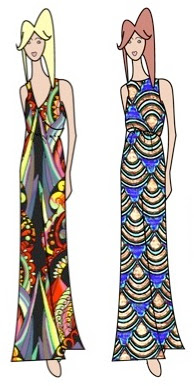 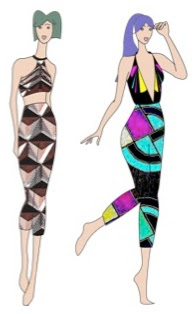 Quite proud of my first, pretty basic, but still plausible, attempts at illustrating on-screen, just hope I get a chance to do more of it at uni! I've also created a magazine for my Final Major Project, so I hope to share some of that with you in my next post!//
Posted by Georgia at 18:58 2 comments:

I've got a lot of love for Topshop's shoes lately, especially their heels. There's a whole load of chunky heels going on in there at the moment, and I'm definitely a girl who loves a bit of chunky heel action. Surprisingly, although the heels are still fairly pricey - mostly in the £50-60 range - I could swear that Topshop's heels used to be more in the £70-80 range? I could be wrong, but this pleased me somewhat. The boots however, still disappointingly high in price, but I have been wanting some 'clunky' ankle boots with all the straps and buckles and whatnot for a while.

I'm particularly loving the wooden heels, I've been searching for some for a while, so when I saw these Topshop ones I was all over them. I've gone mostly for the black versions of each shoe cause if there is only one thing I have learnt in my 18 years of life so far, it's that coloured or patterned shoes don't get half as much wear as plain/dark coloured pairs. I bought light-tan coloured chelsea boots once, big mistake. However contrary to everything I just said, I am particularly attracted to all things yellow at the moment, hence the yellow pair. Not sure why, just am.//
Posted by Georgia at 23:14 No comments:

//London Fashion Week, through the eyes of an intern

Well London Fashion Week AW13 has now well and truly been and gone - so to beat the post-fashion-week blues, I thought I'd share my experience of it all. Although it did exhaust me, I've got to say that it really is something every fashion-loving girl must experience at some point. And it actually is something that everyone can be a part of - the courtyard of Somerset House is completely open to the public and there is such an amazing buzz around - it's an electric atmosphere! Plus there's always the chance of catching a glimpse of your favourite celebrity, blogger, fashion editor - whoever your idol is! 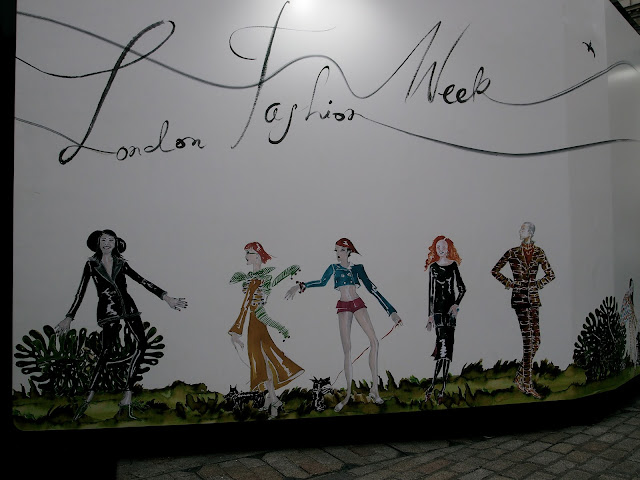 I have, however, been very lucky to be interning with designer brand Palmer//Harding in the run up to LFW, so I got a big healthy helping of fashion week madness! For the past few weeks I have been working with designers Levi Palmer and Matthew Harding, helping them finish up all the garments in their AW13 collection - admittedly this did involve quite a bit of endless button sewing, and being a shirt-focused brand, you can imagine there's a fair few of these! But it all paid off when I got to work with them on the photo shoot for their lookbook, and then, what it was all leading up to, the big day where we took the collection to Somerset House and presented it to the fashion world in a presentation on Saturday afternoon. 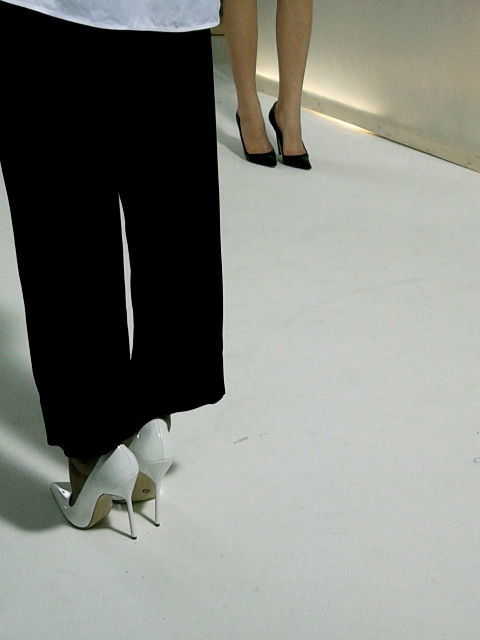 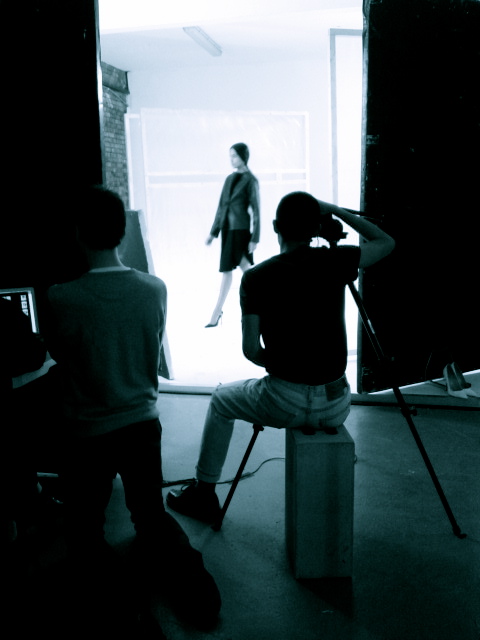 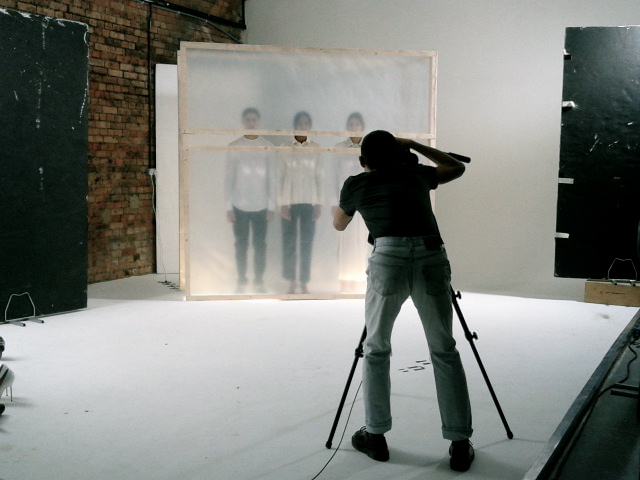 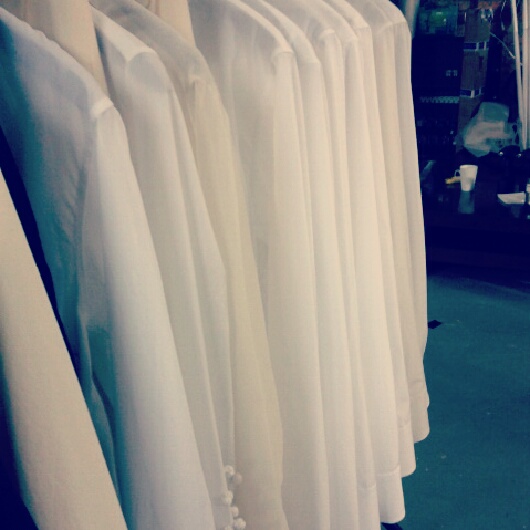 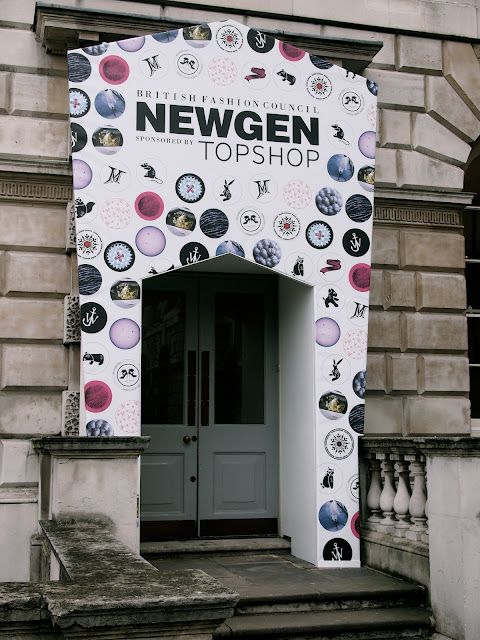 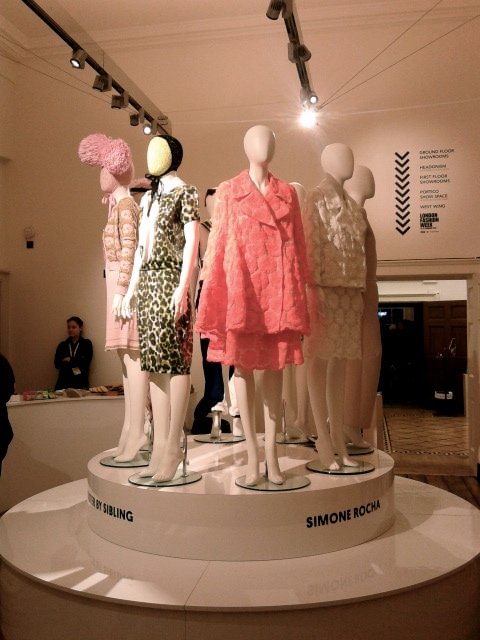 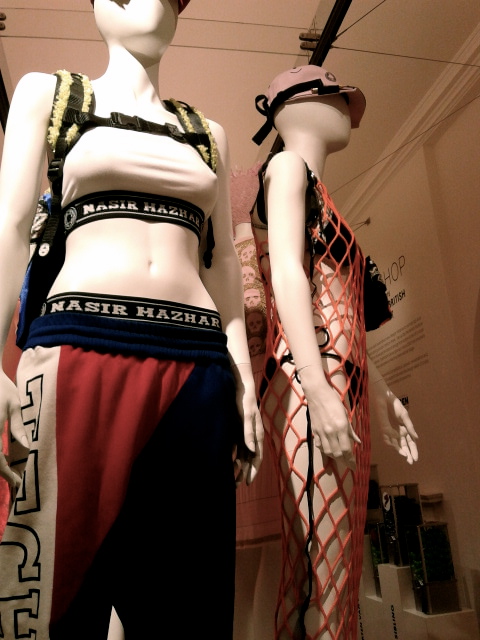 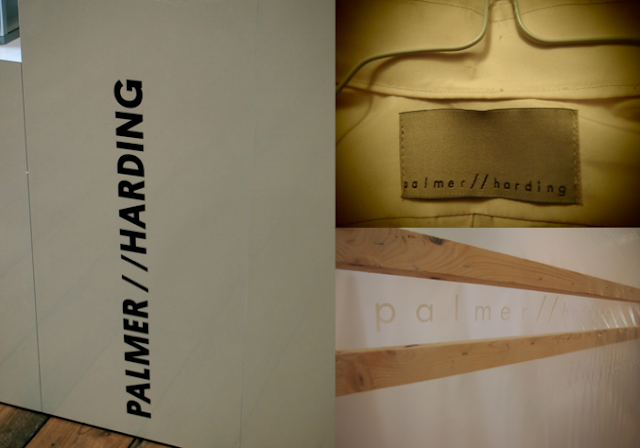 Although I found it a tad daunting being a 17 year old at London Fashion Week, amongst all these big time editors and buyers, just being there experiencing it all was so exciting, plus I got to swan around Somerset House in a gorgeous Palmer//Harding shirt all day! 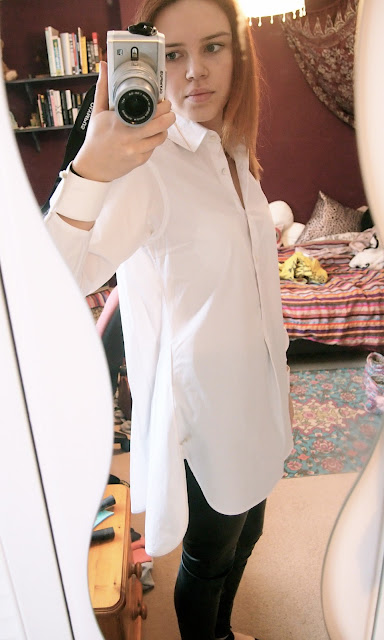 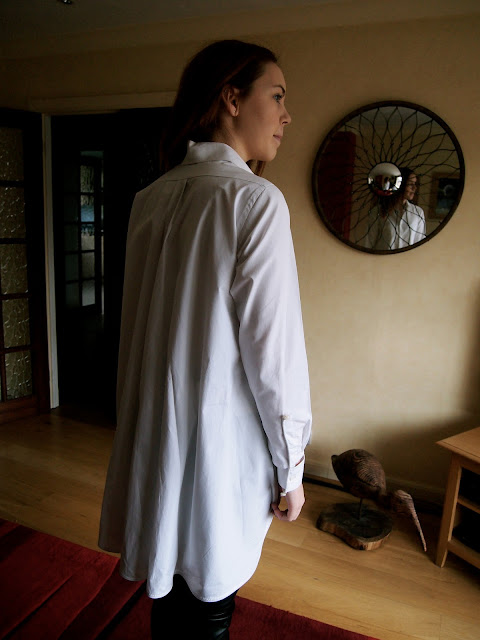 There's quite a stigma attached to interning, how it's unfair that you get no pay and it's said that often you get stuck with mundane/tiring jobs, but the fact is, that's how most industries work nowadays. I've done a fair bit of voluntary/unpaid work and it honestly is the best way to get a foot in the door and gain experience of something.You just don't know what doors it's going to open for you or the people you're going to meet through it, and in my experiences of interning I've ended up with great little insights into the industry at the most thrilling time there is in the fashion world.

The designers I was working with, Palmer//Harding, had an extremely successful presentation, which is no surprise as their beautiful collection was so brilliantly displayed in the Newgen space. You can check out their amazing AW13 collection, and all their previous collections, here.//
Posted by Georgia at 19:31 No comments: